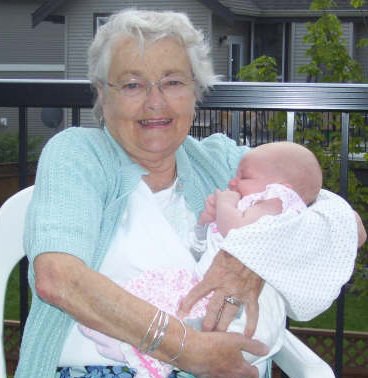 At University Hospital, London, ON on Monday, June 6th, 2011 in her 84th year. Beloved wife of the late Wendall Bond Richards. Dear mother of Robert (Bob) and his wife Helen of Abbotsford, BC and Douglas Richards and his wife Jane of Ailsa Craig, ON. Grandmaman of David (Adrienne) of Regina, SK and Lorna Richards; and Laura, Christopher and John Richards. Great grandmaman of Michael and Gabriel Richards (David). Predeceased by her parents Percy and Lorna Radley, her sister Joan and her husband Murray Fitzpatrick, and Elizabeth Ann (Babette) and her husband Alec Hutchison. Visitation will take place at the Schimanski Family Funeral Home, 401 Albert Street, Brussels, ON on Tuesday, June 14th from 2 to 4 pm and 7 to 9 pm. A Celebration of Life will be conducted at Brussels United Church on Wednesday, June 15th at 11 am. Cremation to follow. Memorial contributions to the Blyth Festival would be gratefully acknowledged. Sheila was totally engaged in every community she called home. Some of her many activities included Girl Guides and Rangers, East Hamilton Community YWCA, Blyth Festival, Blyth Festival Singers, Brussels United Church and The Citizen newspaper. She was a recipient of the Girl Guides of Canada Gold Medal and the 125th Anniversary of the Confederation of Canada Medal. Sheila was a mother to many and an extraordinary friend to all.
To order memorial trees or send flowers to the family in memory of Sheila Richards, please visit our flower store.