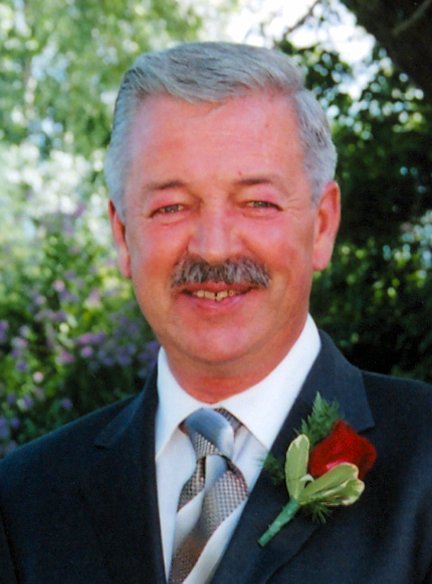 After a brave and prolonged battle, Robert George Templeman peacefully succumbed to his health issues in Listowel Memorial Hospital on Monday, December 12, 2011. Born on October 23, 1942 in Wingham and life long resident of Gorrie, Bob was in his 70th year. He will be sadly missed by his wife of 45 years Mary (Fischer), his sons Troy and his wife Kirsti MacAulay of Guelph, Todd and his wife Karen of Gorrie, and his granddaughter Lauren. Also loved by his brothers Don and Brenda of Listowel, Ken and Marianne of Collingwood, his sister Susan and Bruce Heinmiller of RR#1 Gowanstown, his sister-in-laws Frances (Coulter) of Gorrie, Lorretta and Ron MacFarlane of Kitchener, brother-in-law Doug and Marion Fischer of RR#1 Bluevale, and by his many aunts, uncles, nieces and nephews. Predeceased by his brother Tom Templeman, his parents Audrene (Zimmerman) and Harry Templeman and his step-father Wes Gallaway. Throughout his lifetime, Bob touched the lives of many people as a Howick Minor Hockey coach, tour coach bus driver, Howick Community Centre volunteer, a horse fanatic, and proud Grandpa to name a few. Confronting substantial adversity, Bob maintained a smile, his trademark sense of humour, and a laudable physical toughness all the way to the end. At his request, no service will be held and a private interment of his cremated remains will occur in Gorrie Cemetery next spring. In lieu of flowers, memorial donations may be made to the Howick Firefighters Association, P.O. Box 80, Gorrie, ON N0G 1X0 or the Canadian Cancer Society as expressions of sympathy. Online condolences may be made at www.schimanskifamilyfuneralhome.com
To order memorial trees or send flowers to the family in memory of Robert Templeman, please visit our flower store.