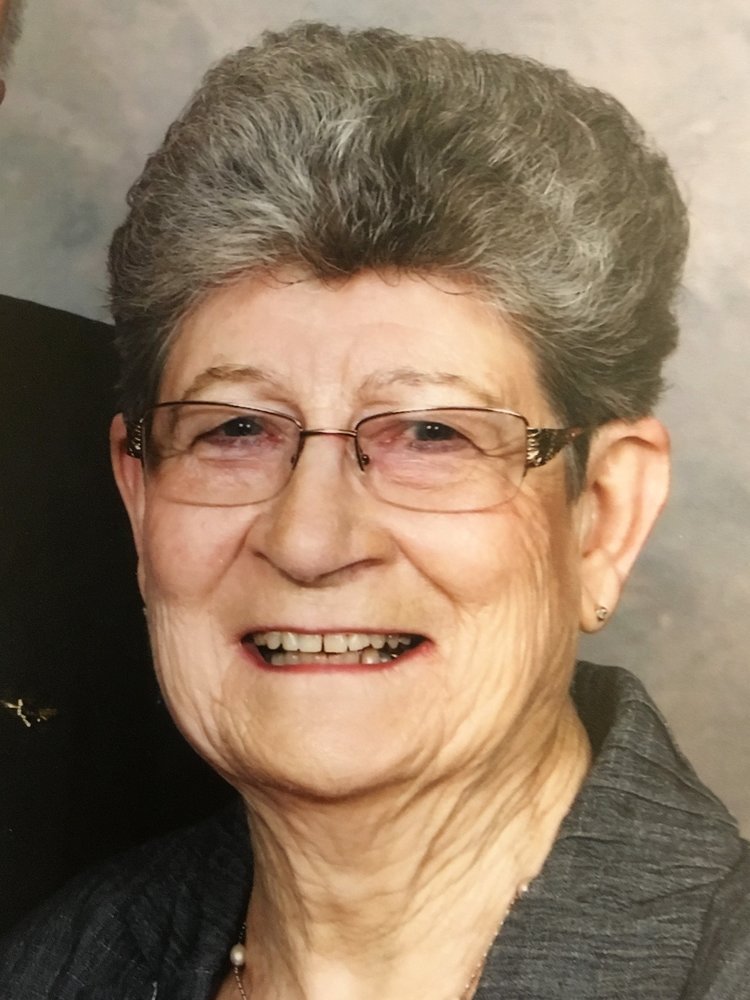 Leona Margaret Armstrong (Johnston) passed away peacefully at her home on Saturday, August 4, 2018 in her 85th year.

Leona was the beloved wife of Jim Armstrong for 64 years, and loving mother to Robert and Lynne (Colborne), Brian and Betty (Woodstock), Bruce and Claudette (Brussels) and Leanne Armstrong (Brussels) and Rick Kootstra.

Leona was the cherished Grandma to Brittany (Nic) Ellis, Brandon (Katie), Andrew (Chauntell), Morgan, Bryce, Caley, Nathan, Tanner and Mykenna Armstrong, and Great Grandma to Lexi and Carter Armstrong.  She was the dear sister of Helen MacLean, Doris (Berne) McKinley and loved by her many family and friends. She will also be missed by many nieces and nephews,

Leona willingly served her community in many capacities.  She thoroughly enjoyed her political career, and was Councillor, Deputy Reeve and Reeve of Grey Township from 1974-1997.  She had the honour of being the first female Warden of Huron County in 1986, proudly following in her father’s footsteps, and her key to Huron County is on display at the Huron County Museum.  Leona was the recipient of the Brussels and area Citizen of the Year in 1997, Senior of the Year in 1999 and a Queen Elizabeth II Golden Jubilee Medal in 2002.  She was a dedicated elder, choir member and member of the Women’s Missionary Society and Women’s Guild of Melville Presbyterian Church for many years.   Also an avid gardener, Leona served as Treasurer of the Brussels and District Horticultural Society for many years, and used her talents to beautify flowerbeds around town, and create arrangements at Melville Presbyterian Church and the dining area at Huronlea Home for the Aged.  She was a Director of the Brussels Agricultural Society and representative on the Ontario Association of Agricultural Societies.  Leona was a founding member and first president of the Huronlea Volunteer Auxiliary, and was also involved with the formation of the Seniors Community Dining Program in Brussels.  She was a long time member of the Majestic Women’s Institute and enjoyed putting many stitches on quilts crafted by members as fundraisers for various projects.  Throughout her life she was a willing volunteer who participated in other local boards and committees.  In addition, she and family members volunteered at Showplane Camping Registration at the Experimental Aircraft Association in Oshkosh, Wisconsin for over 20 years.

Besides her commitment to supporting her community, Leona’s love and commitment to her family was always a priority.  As a family, and in later years with Jim, she enjoyed travelling and meeting people throughout the world.  Leona’s enthusiasm, faith and willingness to serve were an example for her family and permeated all aspects of how she lived her life.

Friends and family will be received at Riverside Funeral Home on Tuesday, August 7th from 2-4 and 7-9 p.m. with the Women’s Institute Service at 9 p.m. Funeral Service will be held at Melville Presbyterian Church on Wednesday, August 8th at 2 p.m. with visitation before the service from 12-2 p.m. Reverend Charm Ireland officiating.

In lieu of flowers and as expressions of sympathy donations to Melville Presbyterian Church or Huronlea Volunteer Auxiliary would be appreciated.

Cards of sympathy and donations may be forwarded to Box 340, Brussels N0G 1H0.

Condolences may be left at www.riversidefuneralhome.com

To order memorial trees or send flowers to the family in memory of Leona Margaret Armstrong, please visit our flower store.