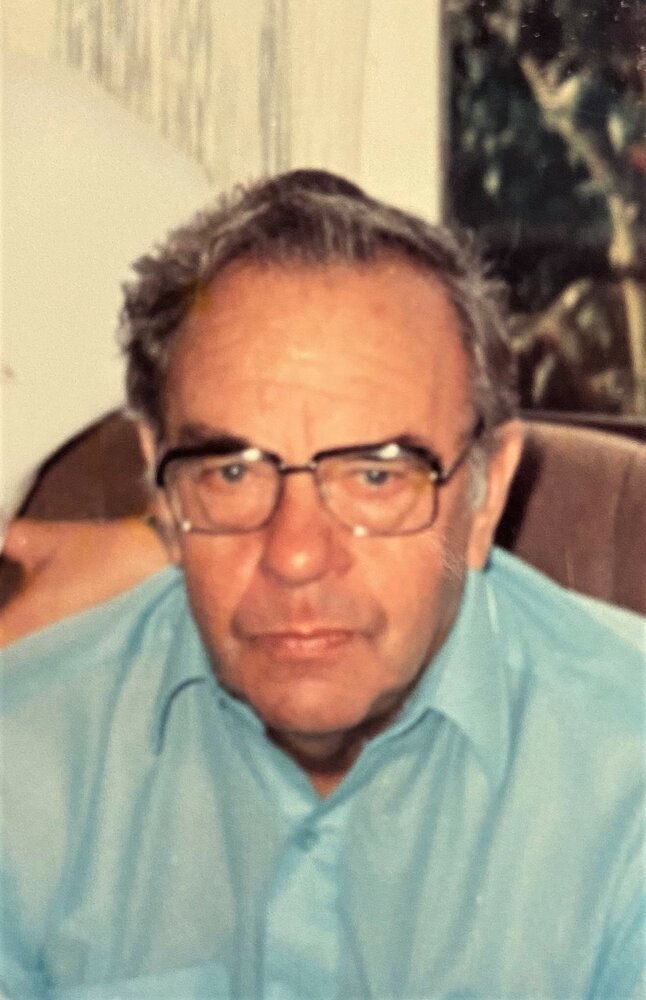 Passed away peacefully at Huronlea Home for the Aged on Wednesday September 28th in his 95th year.

Especially missed by the Siertsema family, many friends, and neighbours.

Friends and family are invited for visitation at Riverside Funeral Home Blyth Chapel on Friday September 30th from 6-8 pm and 1 hr prior to the Funeral Service on Saturday October 1st from 10-11 am.

Please join us via livestream for the funeral service at   https://www.facebook.com/RiversideFuneralHomeInc

In lieu of flowers and as expressions of sympathy donations to the Clinton Hospital or the War Amps would be appreciated.

Hielke was born in 1927 and raised in the Netherlands, in the province of Gronigen, near the small town of Eenrum.  He had 4 sisters, 2 older and 2 younger.  Which is kind of interesting because Hielke went on to have five children only the opposite.  2 boys, a girl and then 2 boys.

Hielke’s family lived on a farm.  They had cows, chickens, horse’s and grew potatoes and sugar beets. It was during the harvesting of potatoes that a young Hielke suffered a farming accident that almost cost him his leg.  His leg was almost severed but thankfully the doctors were able to save it.

At age 12, the world changed.  World War II began. Hielke told us that more than once, German soldiers came to their farm and demanded food, eggs, and milk. Hielke’s father became part of the underground resistance.  2 British pilots were rescued and hidden in their barn along with others.  It must have become known because one day Hielke’s father was picked up while out on the street by German soldiers and taken to a German prison.  Hielke didn’t know if he would ever see his father again.  This left Hielke as the man of the family.  He continued to help his mom and sisters run their farm the best they could.  Although now the German soldiers would come in the night with flashlights and get them all out of bed.  They would measure how tall Hielke was.  The soldiers were convinced Hielke was old enough to be in the army because he was tall for his age. Thankfully Hielke’s mom kept his papers close by so that she could prove his age.

Hielke told us of a day he will always remember.  It was in April 1944, a skeleton of a man arrived at the farm.  His father had returned. He had escaped from the german prison and had walked home.

Finally the war ended and Europe began to piece itself back together.  Hielke was 17 turning 18.  A few years later he attended an agricultural school.  It was here that he made a couple of very good friends.  It was through these friends that he met a young girl by the name of Gertrudina Siertsema.

In 1950, Gertrudina told Hielke that her family was moving out of the country.  Her father had found a sponser in Canada, where there were more opportunities for their family. Hielke was very sad.  But Teresa as she became known, promised to write him letters.  And she did.

Hielke missed her terribly and begged his mother and father to let him go to Canada.  But Hielke was their only son and they wanted him to stay and farm.  Finally after much persistence he convinced his mom and dad to let him go in hopes that he would return.

Once Hielke had his passport he found the first ship that was leaving for Canada.  The first ship was leaving from Paris.  Hielke packed his suitcase and grabbed his bike and boarded a train to Paris, France where he got on a ship and sailed to Montreal, Canada.  Heilke didn’t speak French or English and he was all by himself on this journey.

Once he arrived in Montreal, he found a train that took him to London, Ontario.  Once in London, he found a taxi driver and pulled out a letter that Teresa had mailed him.  He showed the taxi driver the return address on the envelope. So the taxi driver loaded Hielke’s bike in the trunk of the car and Hielke jumped in the backseat with his suitcase, and they headed for Ilderton.

The day Hielke arrived in Ilderton was a Sunday.  And as they drove into the town, Hielke noticed a group of children walking down the road.  Hielke recognized them.  It was the Siertsema children.  He told the taxi driver to stop.  And Hielke jumped out of the car.  Teresa was not with her siblings that day.  The children were walking home from Sunday school and Teresa had been asked by a friend to come for lunch.  Imagine the surprise on her siblings faces when they saw Hielke.  The taxi driver pulled Hielke’s bike from the trunk and Hielke grabbed his suitcase and walked home with the Siertsema children.   Later that day when Teresa arrived home, her mother met her at the door and said, “You have a visitor.”  Teresa came into the house and there was Hielke.  She couldn’t believe her eyes.

The next day, Teresa’s father asked around to see if anyone knew of a farmer who needed a helper.  And sure enough there was a young farmer and his family that lived closer to Coldstream that could use a hired man.  Good job he brought his bicycle….It is about a 10 minute drive in a car from Ilderton.  So Hielke went to live with the young farmer and his family and worked as a hired man.  It was the young farmer’s wife who helped Hielke to learn English.  And it was his boss who taught him to drive in Canada and helped him get his driver’s license.  His boss was nice and let him borrow the farm truck once he got his license to visit Teresa.

But then Teresa broke the news to Hielke that her family was going to move again.  Teresa’s father had the opportunity to own his very own farm.  The farm was in a small town called Blyth.  Which was about an hour’s drive north.  A little far to ride his bike.  But again his boss let him borrow the truck to visit Teresa on weekends.

Hielke decided he needed to make things permanent.  He looked for a job in Blyth.  And he found one working on a farm one concession north of Blyth.  The farmer provided a house to live in.  Hielke and Teresa were married on December 20, 1951 in Clinton. Hielke and Teresa did journey back to the Netherlands to celebrate his marriage with his family.   Once Hielke and Teresa came back to Canada they settled into working and trying to save money.

Hielke also had a dream.  He wanted to buy a farm.  Over the next 6 years both Hielke and Teresa worked a few jobs to save enough to put a down payment on a farm.  They worked in Exeter at a hatchery and at the Exeter cannery.  Then Hielke found a job in Wingham at Lloyd doors that was better paying.  So he and Teresa moved to Wingham.  Both Teresa and Hielke worked in the factory.  But Hielke found that the dust bothered his lungs and he couldn’t work in the factory, so they found him an outside job.

Finally in 1957, they started looking for a farm.  And they found one just north of Blyth on St. Michael’s road.  They started with a few dairy cows and Hielke milked them by hand.

This is where they started their family of five children, Tony, Albert, Susie, Jeff and finally Richard.

Working on the farm was hard work and everyone in the family helped.  This installed a good work ethic in all his children.  Slowly the farm grew, more cows, more acres, more work.  Everyone helped with morning and evening chores.  And summers were filled with bailing hay and straw.

As the children grew up, Teresa decided it would be nice to have a little get away from the farm.  So they purchased a seasonal trailer at family paradise campground.  They could spend their weekends not too far from the farm and the boys were old enough to stay home and could take turns doing the chores.  It worked well.

Then they sold their seasonal site and purchased a new 5th wheel trailer and began to camp at Whispering Pines near Owen Sound and they continued to camp at Family Paradise.  Hielke enjoyed visiting with fellow campers and going searching for treasures at garage sales.  This became a favourite hobby for Hielke.  He loved to search for interesting finds.  He liked to talk to people and negotiate a price.

Once the kids had all grown up and found their paths in life, Hielke decided it was time to sell the dairy herd and the quota.   He switched to beef, a cow/calf operation.  It was less demanding and still allowed him to work on the farm.

Then in 1991 at the age of 64, He decided it was time to sell the farm.  He had found a nice house in Auburn that included an extra building that he could use to house his hobby, buying and selling his treasures.  And it is here that he has enjoyed spending the majority of the last 30 years.  It is here that he has made many friends and watched his grandchildren and now great grandchildren return to visit.

We have many great memories of Hielke we can look back on.  He loved to tease the girls and make funny comments and if you knew Hielke he did not like long visits or sermons.  He would not appreciate this long story I just told you.  He liked short visits.  And when you were about to leave, he had a popular saying that I will share as I wrap up this long story …. “be sure to go straight home now.”

To order memorial trees or send flowers to the family in memory of Hielke Roetcisoender, please visit our flower store.